Letters are not case-sensitive
Send
“The country is on the brink of famine, with over 60 percent of the population not knowing where their next meal will come from,” the leaders of the U.N. World Food Program, Unicef and the World Health Organization said in an unusual joint statement.

That’s a young Yemeni boy, acutely malnourished like two million other children in Yemen — caught up in what the United Nations calls the “world’s largest humanitarian crisis.” 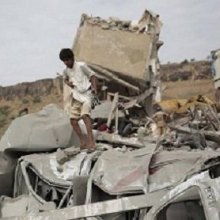 Their suffering is largely a result of monstrous misconduct by a Saudi-led coalition that is supported by the United States and Britain.

With U.S. and U.K. complicity, the Saudi government is committing war crimes in Yemen
“The country is on the brink of famine, with over 60 percent of the population not knowing where their next meal will come from,” the leaders of the U.N. World Food Program, Unicef and the World Health Organization said in an unusual joint statement.

Yemen, always an impoverished country, has been upended for two years by fighting between the Saudi-backed military coalition and Houthi rebels and their allies (with limited support from Iran). The Saudis regularly bomb civilians and, worse, they have closed the airspace and imposed a blockade to starve the rebel-held areas into submission. That means that ordinary Yemenis, including children, die in bombings or starve.

This is Buthaina, a girl believed to be 4 or 5 who was the only survivor in her family of a bombing last week by the Saudi coalition that killed 14 people.

Human Rights Watch has repeatedly concluded that many Saudi airstrikes were probable war crimes and that the U.S. shares responsibility because it provides the Saudis with air-to-air refueling and intelligence used for airstrikes, as well as with much of the weaponry.

Yet victims like Buthaina, aren’t on our television screens and rarely make the news pages, in part because Saudi Arabia is successfully blocking foreign journalists from the rebel-held areas. I know, because I’ve been trying for almost a year to get there and thought I had arranged a visit for this week — and then Saudi Arabia shut me down.
With commercial flights banned, the way into rebel areas is on charter flights arranged by the United Nations and aid groups. But Saudi military jets control this airspace and ban any flight if there’s a journalist onboard. I don’t think the Saudis would actually shoot down a plane just because I was on it, but the U.N. isn’t taking chances. This is maddening: Saudi Arabia successfully blackmails the United Nations to bar journalists so as to prevent coverage of Saudi atrocities.

The Saudis don’t want you to see children like this one, Alaa, severely malnourished and photographed by a World Food Program team. Two days later, Alaa died.

“The situation in Yemen is a disgrace that brings shame to our global community,” says Michelle Nunn, president of Care USA. “More than 20 million Yemenis are in need of emergency assistance, and a child dies every five minutes. Yet few Americans know about the daily bloodshed, near-famine conditions and a raging cholera epidemic.”

We should cut off military transfers to Saudi Arabia until it ends its strangulation of Yemen
The civil war in Yemen started as a local conflict, but Saudi Arabia rushed in because of exaggerated fears of Iranian influence there. All parties have behaved outrageously. But it’s our side that appears to be responsible for the most deaths: A draft U.N. report says that the Saudi-led coalition is responsible for 65 percent more deaths of children than the Houthis and their allies, and it’s the Saudis who have imposed the blockade that is leading to starvation.

In addition, the world’s worst cholera epidemic has broken out in Yemen, partly because so many people are malnourished. An additional 5,000 Yemenis are infected with cholera each day.

The Saudis say, correctly, that they are also providing large amounts of aid to Yemen. But bombing and starving civilians is not excused if one provides Band-Aids afterward. 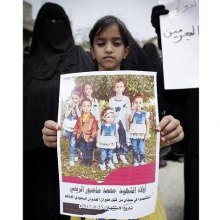 This catastrophe started under President Barack Obama, although he tried — not nearly enough — to rein in Saudi Arabia. President Trump has removed the reins and embraced the rash and inexperienced Saudi crown prince, Mohammed bin Salman, who is overseeing the assault on Yemen.
“Yemen is a moral, humanitarian and strategic disaster for America,” says Aaron David Miller, a former State Department Middle East analyst who advised both Republican and Democratic administrations. “U.S. policy is being driven by its pro-Saudi proclivities and its own desire to contain Iran. But by enabling Riyadh, it’s only making an already fraught situation worse.”

What do we do?
Jan Egeland, a former senior U.N. official who now leads the Norwegian Refugee Council, urges an immediate cease-fire, a lifting of the embargo on Yemen, and peace talks led by the U.N., the U.S. and the U.K., forcing both sides to compromise.
A glimpse of moral leadership has come from the U.S. Senate. A remarkable 47 senators in June voted to block a major arms sale to Saudi Arabia, largely because of qualms about Saudi conduct in Yemen. Those senators are right, and we should halt all arms transfers to Saudi Arabia until it ends the blockade and bombings.
We Americans have sometimes wondered how Russia can possibly be so Machiavellian as to support its Syrian government allies as they bomb and starve civilians. Yet we’re doing the same thing with Saudi Arabia, and it’s just as unconscionable when we’re the ones complicit in war crimes.

The views expressed in this article are the author's opinion and do not necessarily reflect the views of the ODVV.