Letters are not case-sensitive
Send
An independent United Nations expert urged Saudi officials to use their bold new plan for economic transformation to improve the human rights of women and the poor.

Known as Vision 2030, the plan, which was announced in April 2016, is meant to reduce Saudi Arabia’s reliance on oil and develop other service sectors, such as tourism.

“Despite the plethora of serious human rights issues in Saudi Arabia […] Vision 2030 recognizes that Saudi women represent ‘a great asset’ which is currently under-utilized, and the need to recognize women’s rights points in the same direction,” said the UN Special Rapporteur on extreme poverty and human rights, Philip Alston, at the end of his official visit to the country.

He noted that a 2012 decision allowing women to work in the retail sector “transformed the lives of millions of women” who could work outside of the home. He calls for the economic transformations to lift restrictions on women’s economic and independence.

“The driving ban should be lifted, and women should no longer need authorization from male guardians to work or travel,” Mr. Alston said.

During his 12-day visit, Mr. Alston met with ministers and other senior officials, as well as experts, academics and individuals living in poverty in the cities of Riyadh, Jeddah and Jizan.

“In meetings with me the Government was severely self-critical of the shortcomings of its current social protection system and it appears to be making genuine attempts at reforming that system,” said the UN expert.

The Special Rapporteur described the current social protection system for the poor as “a veritable hodgepodge of programmes which is inefficient, unsustainable, poorly coordinated and, above all, unsuccessful in providing comprehensive social protection to those most in need.”

Independent experts and Special Rapporteurs are appointed by the Geneva-based UN Human Rights Council to examine and report back on a specific human rights theme or a country situation. The positions are honorary and the experts are not UN staff, nor are they paid for their work. 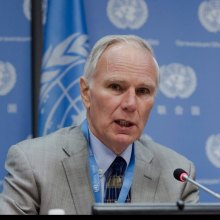