Letters are not case-sensitive
Send
The people of crisis-torn Yemen urgently need humanitarian assistance and protection, especially in the north of the country where there is a threat of famine, the United Nations Emergency Relief Coordinator warned on 1 march.

The overriding need, said Stephen O'Brien, is for all parties to the conflict to provide immediate and safe access so that humanitarian actors can provide what is needed to stave off famine.

“This will require […] all parties to stop gamesmanship or efforts to support their side of the fight by producing bureaucratic impediments and delays, or doubts about inspection mechanisms so that commercial shipment can be restored and food and medicines, and crucially, fuel, so water can be pumped out of the aquifers and cereals, the main foodstuff in the remotest areas of the country, can be processed,” he explained.

Briefing reporters at UN Headquarters in New York via telephone from the Yemeni capital, Sana’a, Mr. O’Brien recalled that he had headed directly to Yemen from the Oslo Humanitarian Conference on Nigeria and the Lake Chad Region, which had generated more than $670 million in pledges to help sustain critical relief operations over the next two years and beyond across four counties where millions are in need of aid.

He said that along with Nigeria, Somalia, South Sudan, Yemen is among the countries, which, for the first time in modern history, could fall into simultaneous famine. “The common factor between the four potential famines is that they are all in the context of man-made conflicts which have become protracted crises in the absence of a resolution of the underlying causes and an unwillingness of the parties to […] find their way to a political track.”

Briefing alongside Jamie McGoldrick, the Resident Coordinator in Yemen, Mr. O’Brien highlighted the difficulties faced by relief agencies to bring aid to the communities that need it and reported that yesterday, he and his team were unable to reach the city of Taiz, because it had been stopped at military checkpoint even after assurances had been received.

“It was very disappointing but illustrative. If I could not get through, it would be much more difficult for caravans that require safe and unrestricted access to reach all people in need wherever they are,” he said.

In this regard, he reported that he spoke with the Houthi authorities on his return to Sana'a and had been assured that effort would be made to open the routes for the flow of food and other humanitarian supplies.

He went on to explain that the country’s population of internally displaced persons (IDPs) is growing and compounding the challenges of access, food insecurity and health care concerns.

As he continues his visit, Mr. O’Brien s, who is also the UN Under-Secretary-General for Humanitarian Affairs, said he would meet with Houthi authorities and make clear the expectation that the UN and all humanitarian implementing partners – international and local – should have immediate, safe and unimpeded access to people in need, at all times, help avert a famine, and to help mobilize resources necessary at the pledging conflict in April in Geneva. 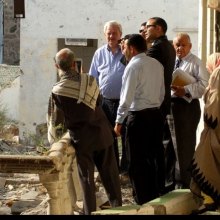