During the first quarter of the year, 33 incidents targeting humanitarians were recorded across the country, placing CAR “among the high-risk countries for humanitarian aid,” according to the UN Office for the Coordination of Humanitarian Affairs (OCHA).

Sixteen of those attacks were in the northern prefecture of Ouham, and were reported since March.

The senior UN humanitarian official in the country strongly condemned the attacks, reminding that half of the population – about 2.2 million people – depends on aid. Provision of basic services has been hampered by decades of instability, the latest following the ouster of President François Bozizé by the Séléka rebel coalition in March 2013.

“Suspending this aid would jeopardize social stability and threaten the fragile resilience of the communities,” said the Humanitarian Coordinator, ai, Michel Yao.

“This withdrawal constitutes a setback in humanitarian access for the Central African Republic, as it places in the disarray of people who have already repeatedly suffered violence and have experienced successive displacements.”

The staff from the four non-governmental organizations (NGOs) will redeploy to the capital, Bangui, while other aid organization plan to “strictly reduce” their presence and possibly withdraw if the attacks persist, according to OCHA.

Aiding children in the ‘forgotten crisis’

Meanwhile, the UN Children's Fund (UNICEF) called for increased support to the more than 1 million children threatened by violence, in what a senior UNICEF official called a “forgotten crisis.”

The situation for children inside the country is “calamitous as violence and widespread displacement have made children especially vulnerable to health risks, exploitation and abuse,” the UN agency reported.

The UN agency is facing a $32.6 million funding gap in its work in the country. 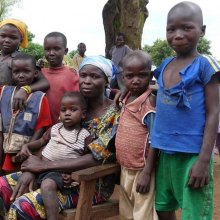