Letters are not case-sensitive
Send
Israeli constraints on movement and economics, along with the blockade on the Gaza Strip and internal political strife, are at the root of Palestinian suffering in the occupied territory, according to two separate United Nations reports released as the Israeli occupation enters its fiftieth year.

“Occupation policies and practices remain the key cause of humanitarian needs in the oPt [occupied Palestinian territory],” the UN Office for the Coordination of Humanitarian Affairs (OCHA) said in its annual report.

David Carden, the head of OCHA in the occupied territories, attributed the hardship to a “pervasive” lack of protection and accountability for international law.

“At its heart, the crisis in the oPt [Occupied Palestinian Territory] is one of a lack of protection for Palestinian civilians – from violence, from displacement, from restrictions on access to services and livelihoods, and from other rights violations – with a disproportionate impact on the most vulnerable, children in particular,” he said in the 2016 humanitarian overview, Fragmented Lives.

Among the issues raised in the report were the restriction on Palestinian movement and access to basic services. Despite some easing of measures, OCHA noted that the number of Palestinians who Israeli officials allowed to leave Gaza had declined in the second half of 2016. The Rafah crossing – the sole crossing between Gaza and Egypt – was only opened for 44 days last year. While in the West Bank, OCHA recorded 572 movement obstacles, with an additional 110 obstacles in the Israeli-controlled Hebron city.

In addition, Israeli authorities in 2016 demolished or seized some 300 donor-funded structures provided as humanitarian aid to Palestinians, with a value estimated at more than $730,000.

This is a summary of the news, for details go to: http://www.un.org/apps/news/story.asp?NewsID=56872#.WTKt-NxdI1k 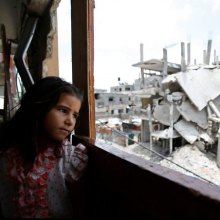