Letters are not case-sensitive
Send
The historical structure of the Iranian city of Yazd with a collection of public-religious architecture was inscribed on the UNESCO World Heritage list on Sunday.

The World Heritage Committee voted in favor of the privilege during its 41st session, which started on July 2 in Krakow, Poland so that the number of Iran’s World Heritage sites add up to 22, ranking first in the Middle East and eleventh globally.

In a 2016 attempt by Iran’s Cultural Heritage, Tourism and Handicrafts Organization, its dossier was deemed incomplete by UNESCO assessors who reminded some shortcomings to be redressed in order to enhance its chances.

In August 2016, Mariana Correia at the head of a UNESCO technical evaluation mission paid a visit to Yazd as part of the decision-making process for inscribing the ancient city.

UNESCO specialists required some modification which have later been addressed by Iran, harboring hope that the inscription would eventually take place with no major obstacles.

The oasis city of Yazd is wedged between the northern Dasht-e Kavir and southern Dasht-e Lut on a flat plain ringed by mountains. Its historical structure enjoys a very harmonious public-religious architecture that dates from different eras.

With its winding lanes, forest of badgirs (wind catchers), mud-brick houses, atmospheric alleyways and centuries of history, Yazd is a delightful place to stay, referring as a ‘don't miss’ destination by almost all travel associates in the region. The city has an interesting mix of people as well, some 10 percent of whom follow the ancient religion of Zoroastrianism. 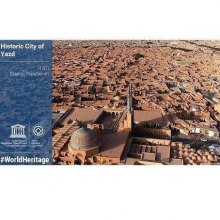