Letters are not case-sensitive
Send
Amid worsening famine and cholera in war-torn Yemen, the head of the United Nations migration agency has called for greater humanitarian access to enable relief workers reach those most in need and save lives.

“The authorities have a responsibility to give humanitarians more access, including reopening the airport for essential aid deliveries, and the world has an obligation to come to the aid of the Yemeni people,” said William Lacy Swing, the Director General of the UN International Organization for Migration (IOM), on a visit to the country.

Responding to the outbreak has been further complicated as the conflict in Yemen has left the country's water and sanitation systems in near-ruin and almost 80 per cent of the population – some 21 million people – as well as thousands of migrants dependent on humanitarian aid.

“The world's worst cholera outbreak is now part of this volatile mix and, as mind-numbing as it may seem, one million Yemenis are expected to contract the deadly disease by the end of this year,” added Mr. Swing.

According to estimates, more than 2,000 people have succumbed to the deadly disease since October last year and 750,000 have been hit with 5,000 additional people being infected every day. Furthermore, more than three million Yemeni children under the age of 5 are at risk of severe acute malnutrition as an ever-present risk of famine looms larger.

“The internecine conflict, which has convulsed Yemen for over two years already, shows no sign of being resolved,” said the IOM Director General, noting that the situation of the nearly 6,000 migrants who continue to enter the country each month is of particular concern. “They come in the hope that they can make their way through Yemen to the Gulf countries to find work.”

However, few realize the grave dangers they are likely to face along the route, including exploitation, abuse and abduction by criminal gangs for hefty ransoms. “For Yemenis and migrants, the protracted conflict has become an endless nightmare,” said Mr. Swing.

During his visit, the head of IOM has met with authorities whom he called on to improve humanitarian access. He also met with persons displaced by fighting, whom the UN agency was only able to reach with aid a few weeks ago – the first time they received assistance since fleeing their homes more than a year back.

“More than two years of brutal conflict has turned this society upside down leaving a trail of needless devastation in its wake,” noted Mr. Swing, adding: “I urge all parties to the conflict to make real efforts towards finding peace because aid alone is not a solution.” 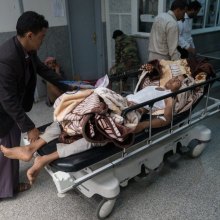