Letters are not case-sensitive
Send
The United Nations Special Envoy for Yemen, Ismail Ould Cheikh Ahmed, was in Aden on january16, highlighting the need for a truce to allow in humanitarian aid and move along the peace process.

“We are encouraging the parties to commit to restoring the 10 April Cessation of Hostilities and take immediate measures which will prevent further deterioration of the economic and humanitarian situation,” the Special Envoy said referring to an agreement by Yemeni parties in 2016, but whose terms and conditions have since been violated.

“The current political stalemate is causing death and destruction every day,” the UN Special Envoy said. “The only way to stop this is through the renewal of the Cessation of Hostilities followed by consultations to develop a comprehensive agreement.”

“Yemen's political elites have a responsibility to shield people from further harm, protect their country's future and commit to a peaceful settlement,” he continued.

The visit follows a week of meetings with senior officials from the Governments of Saudi Arabia, Oman and Qatar in Riyadh, Muscat and Doha, respectively.

In a meeting with President Hadi, Mr. Ould Cheikh Ahmed said he discussed the key elements of a comprehensive agreement, based on consultations in Kuwait, which would help bring an end to the war and Yemen's return to a peaceful and orderly transition.

“I asked the President to act swiftly and engage constructively with the UN's proposal for the sake of the country's future,” Mr. Ould Cheikh Ahmed said, stressing that a peace agreement, combined with a well-articulated security plan and an inclusive government formation is the only way to end the fighting.

According to the UN spokesperson, the Special Envoy will travel to the capital city of Sana'a in the coming days to share the same message with the Representatives of Ansar Allah and General People's Congress. 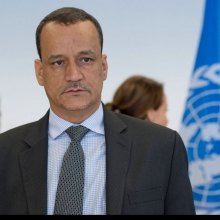