Letters are not case-sensitive
Send
Iranian Majlis Speaker Ali Larijani said on Sunday the order by President Donald Trump in suspending visa for seven Muslim countries including Iran proves “spirit of racism” in the United States.

The move proves that the “violent spirit of racism” in the U.S. has been hidden behind claims of democracy and pretention of human rights, Larijani said in an open session of parliament.

Trump Friday signed an executive order suspending the State Department's Refugee Assistance Program and visa entry from Iran, Iraq, Syria and four other countries, saying they are "detrimental to the interests of the United States."

The order broadly follows the president's campaign pledge to suspend immigration from several Muslim-majority countries until "extreme vetting" can be put in the place to prevent terrorists from entering the country.

The revised guidelines replace his campaign proposal to institute a religious test for immigration. The countries are those that have been designated as countries of concern by Congress and the Obama Administration, and also include Sudan, Somalia, Yemen, and Libya, a White House official said.

Larijani said, “A country which has the power to establish security would not take such decisions. Mentioning Iran in this respect under the pretext of ‘concern’ about terrorist actions is more like a joke,” he said.

The parliament speaker went on to say that Iran has been a pioneer in the campaign against terrorism and is determined in its will to fight violence.

Drawing a comparison between Iran and other countries Larijani called Iran an independent and safe country which supports “peaceful co-existence” between different sects and races based on Islamic values.

Taraneh Alidoosti, the star of Iran’s Oscar-nominated drama “The Salesman”, announced that she would not attend the Oscars ceremony on February 26 even if it turned out the proposed ban did not affect her ability to get a visa.

Larijani praised the actress’ position in this regard. 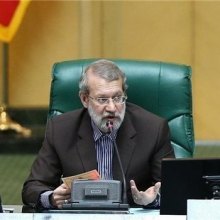 'Every migrant is a human being with human rights,' says UN chief on International Day Migrants ,human rights