Rouhani made the remarks at the 5th International Summit of the World Assembly of Islamic Cities in Qazvin.
“We must invest in environmental issues and one of the easiest and most lucrative ways is to allocate the money we spent on low-quality petrol in vehicles to improve the status of urban areas,” president.ir quoted Rouhani as saying.
“It is not like that we cannot stop any of the environmental predicaments, rather we can control and handle some of them and with effective management we would be able to resolve some of the problems people are struggling with to make their lives easier,” he noted.
The president went on to say that “with integrity and synergy between bodies, and public opinion we can better manage metropolises, achieve long-term development goals, provide people with better income, and reduce inequality.”
“One of our primary responsibilities is to facilitate the development of new technologies and utilizing them in urban management and in a nutshell creating smart cities,” Rouhani suggested.
“Today we are witnessing how using new technologies have positively affected urban life in metropolises such as Tehran,” he stated.
Urban management specifically of metropolises is a complex task to accomplish, Rouhani said, adding, cities must be safe places for everyone and the citizens’ peace and safety must come before anything.
The worst way to raise fund for urban management is to trample on citizens’ rights by demolishing and destroying gardens, green spaces, and cutting trees, Rouhani lamented, adding, similar to oil which belongs to everyone urban areas, plains, mountains, wetlands, and lakes are owned by everyone.

“We are not allowed to sell the beautiful gardens around the cities and develop urban areas by building more tunnels, bridges, and highways as urban sprawl result in dense population and those highways we have constructed would turn into parking lots due to constant traffic congestions,” Rouhani explained.
Some urban and environmental problems need long-term planning to resolve, Rouhani said, adding, but some of them such as scrappage of clunkers, eliminating low-quality gasoline, and switching to less pollutant fuel for power plants can be addressed in a shorter amount of time.
“Nonetheless tackling such problems need comprehensive measures,” the president noted.
The 5th International Summit of the World Assembly of Islamic Cities with main themes of sustainable development goals (SDG) and city prosperity initiative (CPI) was held in the historical city of Qazvin on Sunday with representatives from United Nations, ambassadors, mayors, and urban and religious studies scholars from Turkey, Iraq, India, Indonesia, Bangladesh, Palestine, Afghanistan, China, Morocco, and Pakistan in attendance.
At the end of the summit, Rouhani was awarded with a plaque of honor from UN-Habitat. 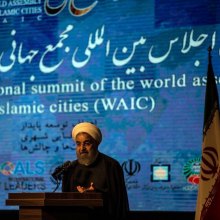