Letters are not case-sensitive
Send
With some 1,000 Palestinians held in Israeli jails on hunger strike for a second month, an independent United Nations expert vising the region called on Israel to comply with international law and standards for detention.

The UN Special Rapporteur on the situation of human rights in the Palestinian territories occupied since 1967, Michael Lynk, raised concern about Israel's use of administrative detention, which involves imprisonment without charge, trial, conviction or meaningful due process.

“Israel's use of administrative detention is not in compliance with the extremely limited circumstances in which it is allowed under international humanitarian law, and deprives detainees of basic legal safeguards guaranteed by international human rights law,” Mr. Lynk said.

Some 500 Palestinian detainees are believed to be administrative detainees, the UN expert said.

He noted that “many” of the 6,000 Palestinian prisoners held by Israel are incarcerated in prisons within Israel, and not in the Occupied Palestinian Territory, in contravention of International Humanitarian Law.

“These transfers create significant barriers to the families of prisoners who wish to visit them, due to the difficulty of obtaining permits to enter Israel, and the often arduous journey families must undertake to reach their relatives,” he pointed out.

Mr. Lynk expressed concern about the reports he has received that prisoners are being held in solitary confinement, being denied access to lawyers, and experiencing other forms of deprivation due to their participation in the hunger strike, including through Israel's 2015 law allowing force-feeding.

“Prisoners everywhere have a right to engage in hunger strikes to protest their living conditions, and they should not be punished as a result,” Mr. Lynk stressed. “Force-feeding is a practice that human rights experts have found could amount to torture.”

The Special Rapporteur is currently in Jordan meeting with officials and civil society representatives related to human rights in the region, but has not received permission to visit the Occupied Palestinian Territory.

Special Rapporteurs and independent experts are appointed by the Geneva-based UN Human Rights Council to examine and report back on a specific human rights theme or a country situation. The positions are honorary and the experts are not UN staff, nor are they paid for their work. 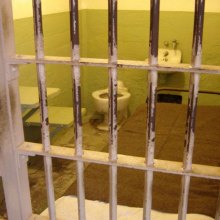