Letters are not case-sensitive
Send
Secretary-General António Guterres expressed concerns over recent public criticism of the United Nations Relief and Works Agency for Palestine Refugees in the Near East (UNRWA) and the integrity of its operations, and called on all Member States to continue to support the agency in discharging its important humanitarian mandate.

According to a statement issued by his spokesperson, the UN chief also expressed his support and admiration for UNRWA's role in delivering essential services and protecting the rights of millions of Palestine refugees across the Middle East.

“UNRWA operates in the front lines of difficult conflict situations and provides education for half a million refugee girls and boys, teaching them human rights and tolerance. Its education and relief activities contribute critically to stability in the region,” read the statement.

It added: “The Secretary-General calls on all [UN] Member States to continue their support to the Agency in order for UNRWA to be in a position to fulfil impartially and efficiently its essential role and to implement its humanitarian mandate to serve Palestinian refugees until a just and durable solution to their situation is found.”

The statement also noted that UNRWA is mandated by the UN General Assembly whose Members have repeatedly acknowledged its unique contribution to peace and security in that region.

Meanwhile, the UN agency reported last Friday that it discovered part of a tunnel which passed under two adjacent UNRWA schools located in the same premises in the Maghazi camp in Gaza Strip.

The discovery was made during the summer vacations when the schools were closed and in the course of construction work in one of the school buildings.

“Following a thorough inspection of the site, [we] can confirm that the tunnel has no entry or exit points on the premises nor is it connected to the schools or other buildings in any way,” read a statement issued by UNRWA, in which it condemned such tunnels in the strongest possible terms.

“It is unacceptable that students and staff are placed at risk in such a way,” UNRWA added, noting that it has robustly intervened and protested to Hamas in Gaza and informed them that it intends to seal the tunnel under its premises, as an immediate priority.

It also noted that the presence of tunnels also violated international law, which provides that UN premises shall be inviolable and underscored that the sanctity and neutrality of UN premises must be preserved at all times. 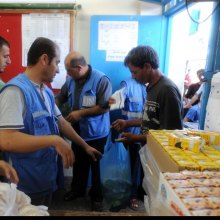