Letters are not case-sensitive
Send
A “race” is under way to contain the cholera epidemic in Yemen where 20 out of 22 governorates are affected, United Nations agencies said.

The disease is endemic in Yemen and is characterized by severe watery diarrhoea and fever.

Nearly 1,200 people have died in the latest outbreak and there are more than 172,000 suspected cases in the crisis-torn country, according to the World Health Organization (WHO).

Together with the UN Children's Fund (UNICEF), WHO says it is attempting to stop cholera being “exported” from the worst-affected areas.

In Raymah in western Yemen, mortality rates are almost twice the national average.

“We see that the numbers are going up, it's really trying to race against the spread and try to get treatment and water and sanitation measures to every corner, especially to those corners that are basically exporting the bacteria to other places” Tarik Jasarevic a spokesperson for WHO told reporters at the regular bi-weekly press briefing in Geneva.

The more than two-year conflict in the country has devastated the country's health facilities; less than half are fully functional and many public health professionals have not been paid in months.

And although cholera can be treated quickly if caught early, WHO said in a statement that getting help in a middle of a conflict “is not so easy.”

The agency added that its health, water, sanitation and hygiene partners need $66.7 million to scale up the cholera response.

To date, WHO has helped to set up 144 diarrhoea treatment centres and 206 oral rehydration points, along with more than 1,900 beds for cholera patients in 20 governorates. 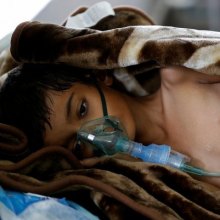