Letters are not case-sensitive
Send
Thousands of people in the [Persian] Gulf face the prospect of their lives being further disrupted and their families torn apart as new arbitrary measures announced by Saudi Arabia, Bahrain and the United Arab Emirates (UAE) in the context of their dispute with Qatar are due to come into force from June 19th, said Amnesty International.

The three [Persian] Gulf states had given their citizens the deadline of 19 June to leave Qatar and return to their respective countries or face fines and other unspecified consequences. They had given Qatari nationals the same deadline to leave Bahrain, Saudi Arabia and the UAE and have refused entry to Qatari nationals since 5 June.

“The situation that people across the [Persian] Gulf have been placed in shows utter contempt for human dignity. This arbitrary deadline has caused widespread uncertainty and dread amongst thousands of people who fear they will be separated from their loved ones,” said James Lynch, Deputy Director of Amnesty International’s Global Issues Programme.

“They should immediately cancel this sinister arbitrary deadline, otherwise thousands of families risk being torn apart, with others losing their jobs or the opportunity to continue their education. People undergoing medical treatment are being made to choose between continuing their treatment or complying with the overly broad and harsh measures announced by Saudi Arabia, UAE and Bahrain.”

The governments of Bahrain, Saudi Arabia and UAE have made statements acknowledging the impact of their measures on mixed-nationality families and announced the establishment of emergency hot lines for affected individuals. Such a measure is clearly insufficient to address the human rights impact of the arbitrary, blanket measures imposed on 5 June.

Statements by the authorities in Saudi Arabia, the UAE and Bahrain that people will be punished for expressing sympathy towards Qatar or criticizing government actions have contributed to the climate of fear spreading across the region.

On 13 June a Bahraini lawyer was arrested after he filed a lawsuit against his government arguing that the measures taken against Qatar are unconstitutional and violate the rights of Bahraini citizens, then posted a copy of this complaint on his Facebook page.

This is a summary of the report: https://www.amnesty.org/en/latest/news/2017/06/gulf-qatar-dispute-human-dignity-trampled-and-families-facing-uncertainty-as-sinister-deadline-passes/ 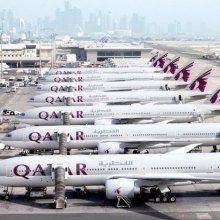