Letters are not case-sensitive
Send
Voicing concern over the abuse of religion to justify incitement to violence and discrimination, United Nations Secretary-General António Guterres underscored the importance of religious leaders in preventing violence and contributing to peace and stability.

“Around the world, we see how religion is being twisted [and] cynically manipulated,” stressed the Secretary-General on July14th, speaking at the launch of an initiative to prevent atrocity crimes, which include genocide, crimes against humanity, and war crimes.

In his remarks, Mr. Guterres cautioned against the proliferation of hate speech – both online and offline – and said that such messages spread hostility and hatred, and encourage populations to commit violence against individuals or communities, often based on their identity.

“Hate speech sows the seeds of suspicion, mistrust and intolerance [and] over time, it can play an important role in convincing people that violence is logical, justifiable, even necessary,” added Mr. Guterres, joined by UN Special Adviser on the Prevention of Genocide, Adama Dieng, and a number of religious leaders from around the world.

Hate speech is one of the most common warning signs of atrocity crimes, Mr. Guterres said, noting that early action can be taken to prevent them from occurring and that religious leaders are key actors in that warning process.

Also in his remarks, Mr. Guterres highlighted the commitment expressed in the Plan of Action for Religious Leaders and Actors to Prevent Incitement to Violence that Could Lead to Atrocity Crimes to promote peace, understanding, mutual respect and the fundamental rights of all people.

He said the Plan sets out a broad range of ways in which religious leaders can prevent incitement to violence and contribute to peace and stability.

“These principles summon us to show respect for all human beings, even those with whom we might profoundly disagree or whose cultures might seem alien,” he said, calling for the widest possible dissemination and implementation of the Plan of Action.

“Let us work together to prevent and end atrocity crimes and all affronts to human rights and dignity,” he stated.

The Plan of Action is the product of two years of consultations led by Special Adviser Dieng, that involved religious leaders and actors representing different faiths and faith-based organizations around the world.

Known more commonly as the “Fez Plan of Action” for the city in Morocco where it was drafted in 2015, the Plan called for monitoring of incitement, the development of alternative messages, engagement in dialogue, efforts to develop and revise education to include better mainstreaming of appreciation of all cultures, engaging in and strengthening inter-religious and intra-religious dialogue and activities to ensure understanding, respect and communication, engaging in dialogue on grievances, strengthening clarity of message and engaging with political leaders.

It was further developed over the past two years in discussions with religious leaders, as well as young people, women and civil society groups. 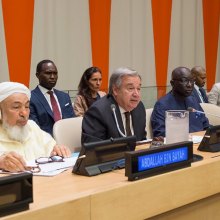