Letters are not case-sensitive
Send
The Central African Republic (CAR) has spiralled into violence and remains one of the worst countries in the world to be a child and “right now there are few eyes looking at them and few hands trying to help,” the United Nations children's agency said.

“The past year, and especially the last quarter, has seen a dramatic increase in violence,” Donaig Le Du, spokesperson for the UN Children's Fund (UNICEF), told reporters at the regular press briefing in Geneva.

“And there are still 480,000 CAR refugees in neighbouring countries. So out of an estimated population of a little over five million, one in five is either a refugee or displaced, half of them children,” Ms. Le Du added.

UNICEF noted that as the country spirals into violence, Bangui, the capital, is quiet.

Two-thirds of the country is controlled by armed groups

Beyond Bangui, two-thirds of the country is controlled by armed groups.

“In the cities and villages that were recently affected by violence, that means that schools are closed. That teachers don't dare to go to schools. Several NGOs [non-governmental organizations] have retreated, which means no health care. Supplies are looted – at one health centre, solar panels were stolen from solar fridges for example, which means no immunizations,” Ms. Le Du elaborated.

Horrendous reports on children's rights violations have surfaced over the past months and weeks.

“Precise numbers are impossible to know but we know for a fact that children have been killed; there have been incidents of sexual violence, and that recruitment into armed groups is happening. But there are less direct violations with lasting consequences – having to flee or take refuge in the bush; having no education or health care, she said.

One specificity of the CAR conflict shows little fighting between armed groups, which instead attack civilians on the other side and increasingly target the UN Multidimensional Integrated Stabilization Mission (MINUSCA) and humanitarian actors.

An open letter to the UN Secretary-General from major international NGOs identifies the CAR as the most dangerous country in the world to deliver humanitarian assistance – with the world's highest level of violence against humanitarian workers, accounting for one-third of all incidents targeting aid workers.

This is a summary of the news : http://www.un.org/apps/news/story.asp?NewsID=57359#.WZQXnykVTIU 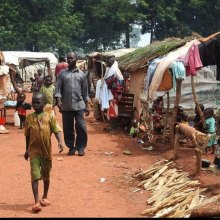