Letters are not case-sensitive
Send
Calling for creative ways to work towards peace in Syria, the United Nations Special Envoy outlined the political path forward, which includes holding another round of the so-named Astana talks and behind-the-scenes efforts by the international community.

“This is a time for realism and focus, for shifting from the logic of war to that of negotiation, and for putting the interests of the Syrian people first. If I could identify one thing above all that can make the difference, it will be a sense of unity of purpose internationally with clear priorities and common goals,” UN Special Envoy for Syria, Staffan de Mistura, told the Security Council.

He noted that the next round of what has become known as the 'Astana talks' – between the Syrian conflict parties and led by Russia, Turkey and Iran – will be held on 14 and 15 September.

These three countries “will need to keep actively working, as they have been doing, on de-escalation,” Mr. de Mistura said, adding that he and his team will be supporting these efforts.

The UN official also noted the key role that Saudi Arabia and other countries with influence over the opposition have in fostering “cohesion and realism of the opposition.” Mr. de Mistura said his office is ready to convene further technical talks to support Saudi efforts on unifying the opposition.

In addition, he noted the importance of working with the Government of Syria. He said that it will be vital for those countries with influence to “assess the situation carefully and signal a genuine readiness for dialogue and inclusion” on the country's political future.

He added “it is my hope that both the Syrian Government and the opposition will come to Geneva then to engage in formal negotiations.”

Also the Council heard from outgoing Under-Secretary-General for Humanitarian Affairs and Emergency Relief Coordinator, Stephen O'Brien. Addressing the Council for the final time after two years on the job, Mr. O'Brien made an emotional appeal for the 15-member body to do more to end the brutal civil war, now in its seventh year.

He expressed frustration at the “little progress” made in recent months in responding to the needs of thousands of people who remain besieged in Foah, Kefraya and Yarmouk.

Mr. O'Brien noted that on numerous occasions, despite agreement to distribute aid, the trucks were loaded only be to be unloaded.

He cautioned that thousands of people – mostly women and children – depend on the international community's collective action.

Among other points raised, he reiterated that civilians, humanitarians and health workers are not a target, and said that he stands in solidarity with the millions of civilians whose lives have been destroyed by the conflict.

This is a summary of the news: http://www.un.org/apps/news/story.asp?NewsID=57442 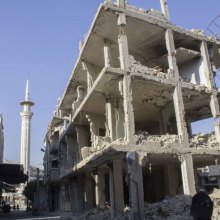