Letters are not case-sensitive
Send
The public flogging of jailed blogger Raif Badawi is now “sure” to resume after Saudi Arabia’s Supreme Court upheld his sentence at the weekend, his wife has told The Independent.

Ensaf Haidar spoke out amid growing fears among human rights groups that Mr Badawi will be publicly flogged for a second time on 12 June. On 7 June his sentence of ten years in jail and 1,000 lashes was upheld despite the international outcry over his treatment.

Ms Haidar, who now lives in Quebec with the couple’s three children after being forced to flee Saudi Arabia, said she was convinced that his brutal punishment was about to resume and called on the country’s royal family to release him.
READ MORE: SAUDI ARABIA UPHOLDS RAIF BADAWI'S SENTENCE
RAIF BADAWI'S WIFE PLEADS FOR EU TO DO MORE
SAUDI RATE OF EXECUTIONS DOUBLES IN A YEAR

“I am sure they will start flogging him again, maybe this Friday, I don’t know,” she wrote in an email. “I am very shocked. I appeal to the princes Mohammed bin Nayef and Mohammed bin Salman to pardon my husband.”

Mr Badawi was arrested in June 2012 after criticising the kingdom’s clerics through his Saudi Arabian Liberals website and accused of “insulting Islam through electronic channels”. He endured his first round of 50 lashes in January this year, but since then the weekly punishment has been repeatedly postponed.
His case was sent for review by Saudi authorities as the global condemnation grew, but on 7 June his supporters’ hopes of a more lenient sentence – or even a full pardon – were dashed. A few days before the decision was handed down, Mr Badawi told his wife not to expect him to be released in the near future.

Allan Hogarth, head of policy and government affairs at Amnesty International UK, said: “After the Supreme Court’s callous ruling we’re now extremely worried that Raif is going to be flogged on Friday. It’s utterly shocking to think that he could be flogged week after week until all 950 lashes have been dished out.

“Raif is a prisoner of conscience who shouldn’t be behind bars at all and shouldn’t be facing any kind of punishment, never mind lashes. It’s time for the Saudi authorities to end the persecution of this man.”
The group is urging its supporters to contact the Saudi Arabian embassy in London, with the hope of persuading authorities to end his punishment, which it described as “disgustingly cruel”.

The Government has been accused of failing to put enough pressure on Saudi Arabia over the case in order to protect the UK’s diplomatic ties with the country, but the Foreign and Commonwealth Office (FCO) insists that ministers have “repeatedly” raised the issue.
An FCO spokesman said: “We are extremely concerned that Raif Badawi’s sentence has been upheld by the Supreme Court in Saudi Arabia. We have raised his case at the most senior levels in the Government of Saudi Arabia and will continue to do so.

“The British Government’s position on human rights is a matter of public record. We regularly make our views well known including through the UN Universal Periodic Review process and the Foreign and Commonwealth Office’s annual Human Rights and Democracy Report.”

Last month Ms Haidar published an emotional appeal to the Saudi authorities to mark a year since her husband was sentenced. Arguing that he had been locked up merely because he was “a man of thought who conveyed that thought in writing”, she accused the country of treating her husband “like a criminal” simply because he had spoken his mind.

David Mepham, UK director at Human Rights Watch, said: "International outrage at the harshness and cruelty of the sentence imposed on Raif Badawi likely led the Saudis to suspend further flogging sessions in January. The possibility that the flogging might resume this week should prompt concerted international opposition and pressure on the Saudis - to permanently suspend this cruel punishment and release him immediately."
Badawi's physical punishment so far

Raif Badawi has only been publicly flogged once since his sentence was handed down, enduring 50 lashes from a Saudi security officer in a square outside a mosque in Jeddah on 9 January. The scene was covertly recorded by an onlooker on a smartphone and uploaded to YouTube, where it can still be viewed.

The footage shows the blogger being beaten with a cane, watched by a crowd of several hundred cheering people shouting “Allahu Akbar” (“God is great”). Mr Badawi’s back is to the camera, but he does not appear to cry out during the flogging and was reportedly able to walk unaided after it ended.
“Raif raised his head towards the sky, closing his eyes and arching his back,” a witness told Amnesty International at the time. “He was silent, but you could tell from his face and his body that he was in real pain.”

In his first letter from prison, published by the German newspaper Der Spiegel in March, Mr Badawi recalled his feelings during the lashing. “All this cruel suffering happened to me because I expressed my opinion,” he wrote.

The blogger’s second round of lashes was postponed on medical grounds and since then he has escaped further punishment, but is still in jail. The group Freedom from Torture has said that as well as the risk of infection from open wounds, victims of flogging can be damaged psychologically, experiencing “feelings of fear, anxiety, humiliation and shame”. 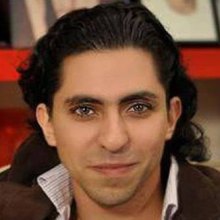 Active participation of the Organization for Defending Victim of Violence in the 29th session of Human Rights Council human rights ,violation ,violence