Letters are not case-sensitive
Send
United Nations Special Rapporteur on Unilateral Coercive Measures  (UCM)s: Sanctions have the most impact on vulnerable groups and delivery of humanitarian aid

United Nations Special Rapporteur on Unilateral Coercive Measures  (UCM)s: Sanctions have the most impact on vulnerable groups and delivery of humanitarian aid. A side event on "Unilateral Coercive Measures and Human Rights" was held on the sidelines of the 51st session of the United Nations Human Rights Council by the Organization for the Defense of Victims of Violence.

in this meeting - which was chaired by Dr. Hassan Fartosi, a lawyer and international jurist, on behalf of the organization for ODVV - Professor Alena Dohan, the UN Special Rapporteur on Unilateral Coercive Measures of the United Nations Human Rights Council,  Referred to the effects of the sanctions on the vulnerable sections of target societies and said: Due to the impact of secondary sanctions, even limited sanctions, such as the ones imposed on individuals and key economic figures, can have severe effects on the people, such as what happened in Zimbabwe.

She added: Sometimes patients are forced to sell subsidized medicines on the black market in order to meet their livelihood needs.Regarding the impact of sanctions on students' access to international university resources,

she added: Unilateral sanctions have not only affected the access of Iranian students, but also limited the access of university professors to foreign resources and articles, as well as access to communication platforms such as Zoom and international virtual meetings.

In this regard, she added that she have corresponded with UNESCO in this regard, but her voice is insufficient in this matter, and the cooperation of the civil society is required so that the voice is heard.

She also explained that: In Zimbabwe, as one of the countries under sanctions, the lack of access to drinking water  infrastructures, such as the unavailability of the raw material for producing water pipes lines, has caused limitation of access to safe drinking water and significant increase in the cases infected by deseases such as cholera.

The special rapporteur on UCMs further emphasized:
Iran has announced that it will enroll all Afghan refugees in public schools, but in many cases, livelihood problems cause refugee children to stop studying due to the inability to provide stationery or bus tickets to go to and from school.

She also continued:
Under sanctions, the number of female-headed households increase because men migrate abroad to earn money for their families and in many cases they face serious problems in transferring their wages to their countries. In these situations, the female heads of households struggle with problems such as unemployment and complications such as delinquency and prostitution.

She also expressed concerns that,
In Venezuela, many hospitals lack sufficient equipment and the number of some medical life saving machniary is so low that if several patients need the same machine at the same time, some of them will die. Also, in this country, sanctions have limited the access of hospitals to 50 types of life saving medicine and lack of necessary  equipment have made it impossible for hospitals to perform very simple blood tests.

She also admitted that the death rate has doubled in the last two years in this country.

Pointing out that in many sanctioned countries, special patients are deprived of access to their medicines, Professor Dohan added that, sanctions have also impeded the transfer of humanitarian aid which is allegedly exempted from sanctions, but in reality, issuing a license to send the aid is so time consuming and costly that makes these humanitarian exemptions practically ineffective.

Another problem that targets humanitarian items is that the relevant exemptions only include food and medicine and do not cover essential items such as drinking water, water supply facilities and spare parts for medical devices.

In the continuation of this meeting, Dr. Parsapour, CEO of Human Globe (an organization that works for children with cancer) said:
Lack of medicine is caused by the unwillingness of some pharmaceutical companies to sell medicine to sanctioned countries.

He added: "In Iran, the sanctions have caused patients such as children with cancer and EB to face the problem of lack of their medicine. In some cases, we have witnessed that the father of a family has committed suicide due to his inability to provide medicine for his child".
Dr. Parsapour was also concerned that: "During the sanctions, medicine has been used as a political tool." Many children, who are easily treated if medicine, is available, become disabled or die under sanctions. He went on to present some cases of these children and described the situation of two children from Iran with cancer.  It was decided that the documentation is presented to the special reporter for her follow-up. 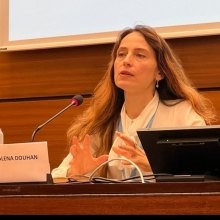