About 19,000 people have been killed by ISIS in Iraq and over 3.2 million have been displaced since 2014, a recent report by the United Nations said, adding that the range of atrocities committed by the militant group include war crimes, crimes against humanity and "possible genocide." As many as 3,500 women and children, mainly from Yezidi community remain in ISIS captivity, being held as slaves or sex slaves subjected to sexual violence.

"It is likely that most of the members of [these] communities located in areas of ISIS control have been killed, abducted or [already] fled," the report said.

"The violence suffered by civilians in Iraq remains staggering. The so-called 'Islamic State of Iraq and the Levant' continues to commit systematic and widespread violence and abuses of international human rights law and humanitarian law."

Iraq lies in ruins from the ongoing carnage by ISIS and the continued fight between IS and other groups fighting it including Iraqi security forces.

"During the reporting period, ISIL killed and abducted scores of civilians, often in a targeted manner. Victims include those perceived to be opposed to ISIL ideology and rule; persons affiliated with the government, such as former Iraqi security forces, police officers, former public officials and electoral workers; professionals, such as doctors and lawyers; journalists; and tribal and religious leaders," the report stated.

"Others have been abducted and/or killed on the pretext of aiding or providing information to government security forces," it continued. "Many have been subjected to adjudication by ISIL self-appointed courts which, in addition to ordering the murder of countless people, have imposed grim punishments such as stoning and amputations."

The group that has captured vast stretches of land in Iraq and Syria, uses appalling methods of killing including bulldozing, throwing people from buildings, beheading, and burning alive. Also, the terrorist organization has killed many people in bomb attacks, often through suicide bombers.

The report gave details of some individual instances of sexual violence perpetrated by ISIS, such as a Quran-recitation contest in Mosul where sex slaves were given as prizes for winners.

"Even the obscene casualty figures fail to accurately reflect exactly how terribly civilians are suffering in Iraq," Zeid Ra'ad al-Hussein, UN's human rights chief, said in a statement. "The figures capture those who were killed or maimed by overt violence, but countless others have died from the lack of access to basic food, water or medical care." 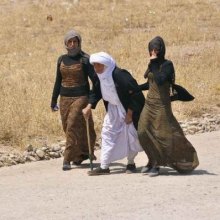 Do not stand silent while Syrian parties use starvation, fear as ‘methods of war,’ urges UN aid chief ISIS