Letters are not case-sensitive
Send
The Isis jihadist group has completely destroyed a 1,400-year-old Christian monastery in Iraq, the oldest of its kind in the country.

Satellite images released on Wednesday by the Associated Press showed just a pile of rubble where St Elijah's Monastery used to stand on a hill above Mosul, Isis's stronghold in Iraq.

The monastery had survived as a place of Christian worship for almost one-and-a-half millenia, predating Islam itself, and had only suffered superficial damage throughout the country's most recent conflicts.

An historically significant site, the partially restored 27,000-square-foot stone building had 26 distinct rooms including a sanctuary and chapel. It still had niches where monks used to tuck candles, and the fourth century Greek "Chi-Rho" symbol, representing the name of Christ, was still visible carved into its right gatepost.

The site was recently used as a place of worship for US troops in Iraq, but fell into Isis hands in June 2014. This month, AP reported, satellite images commissioned from the firm DigitalGlobe confirmed what local antiquities experts have feared for some time.

"Our Christian history in Mosul is being barbarically leveled," said Iraq-based Catholic priest Rev Paul Thabit Habib. "We see it as an attempt to expel us from Iraq, eliminating and finishing our existence in this land."

The demolition itself appears to have taken place at some point between August and September 2014, image analyst Stephen Wood told AP.

Images show the stone walls "have been literally pulverized", he said. "Bulldozers, heavy equipment, sledgehammers, possibly explosives turned those stone walls into this field of gray-white dust. They destroyed it completely."

Isis has saught to destroy sites like St Elijah's Monastery (Dair Mar Elia in Arabic) across Syria and Iraq since its reign of terror began in earnest in early 2013.

The group seeks to wipe out non-Islamic history, calling all religious shrines even to other sects within Islam idolatrous.

Most infamously, it has destroyed whole swathes of the ancient city of Palmyra in Syria since it overran it in August 2015.

The terror group has blown up three tower tombs in the city and in September destroyed the 2,000-year-old Temple of Bel by filling it with explosions leaving a solitary arch standing. This came after they destroyed the Temple of Baalahamin.

Roman Catholic US Army chaplain Jeffrey Whorton, who celebrated Mass on the St Elijah's Monastery altar, was grief-stricken at its loss.

"Why we treat each other like this is beyond me," he told AP. "Elijah the prophet must be weeping." 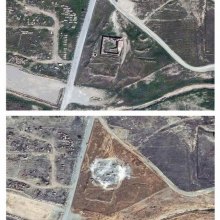