Letters are not case-sensitive
Send
Though there are significantly fewer reports of violence in some parts of Syria, the consequences of the conflict continue to devastate lives, the top United Nations relief official said on May 30th, calling for ending attacks and obstacles that prevent humanitarian workers from reaching the hundreds of thousands of civilians still trapped in the war-torn country.

“We must not lose sight of the fact that – all over Syria – millions of people, in locations inside and outside the four de-escalation areas, continue to suffer because they lack the most basic elements to sustain their lives,” said Stephen O’Brien, the UN Emergency Relief Coordinator, briefing the Security Council.

“We must not stand silent while violence flares up elsewhere in the country and parties continue to use starvation, fear tactics and the denial of food, water, medical supplies, and other forms of aid as methods of war,” he stated.

The war in Syria, now into its seventh year, has extracted the worst toll on the country’s children. Tens of thousands have been killed and many have been forcibly detained, tortured, subjected to sexual violence, forcibly recruited and in some cases executed.

Just last week, 30 children and women were injured in an attack by Islamic State of Iraq and the Levant (ISIL/Da'esh) on besieged neighbourhoods in Deir ez-Zor as they were lining up to collect water.

Furthermore, in recent weeks, more than a hundred civilians, many of them women and children, have fallen victim to escalating counter-ISIL airstrikes, particularly in the north-eastern governorates of Al-Raqqa and Deir ez-Zor.

According to estimates, nearly seven million children are living in poverty and some 1.75 million are out of schools with another 1.35 million at the risk of dropping out. Almost one in three schools have been damaged, destroyed, or otherwise made inaccessible.

“And even if the schools were intact, many would be unable to open, with almost one quarter of the country’s teaching personnel no longer at their posts,” said Mr. O’Brien.

The situation of those outside of the country, living as refugees, remains equally uncertain with many rendered “stateless”.

In his remarks, Mr. O’Brien, also the UN Under-Secretary-General for Humanitarian Affairs and the head of the UN Office for Coordination of Humanitarian Affairs (OCHA) recalled the memorandum, agreed to during the recent meetings in Astana, between the three guarantors – Iran, Russia and Turkey – on the creation of four de-escalation areas and that stipulates that fighting must significantly decrease and unhindered humanitarian access be enabled to these four areas.

He also stressed the need to ensure that all obstacles, including bureaucratic ones, are put to an end, once and for all, and the UN and its humanitarian partners can sustainably reach those who are trapped behind the current front lines.

He also underscored that in many other parts of Syria, humanitarian and protection space continues to shrink, primarily due to increasingly strict limitations by local authorities, non-State armed groups, as well as terrorist organizations.

Speaking particularly on the north-eastern parts of the country, Mr. O’Brien called on all with influence over the parties involved to act now, “further delays or restrictions will only result in the continued suffering and the death of civilians.”

“With some 100,000 people displaced due to fighting around Raqqa since April, access is needed now through every possible modality,” he said, calling on the Security Council “to take all necessary steps to see that the will to place humanitarian aid delivery in its rightful position – outside of any military or political calculations and totally impartially – is restored.” 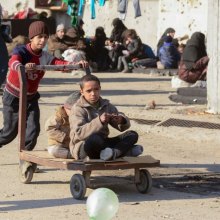