Letters are not case-sensitive
Send
Some 10,000 flamingos have stayed in Lake Urmia national park this year instead of migrating as better ecological conditions in the biosphere reserve are already satisfying their needs.

This year the birds didn’t fly to other areas such as South Africa and the Persian Gulf, IRNA quoted Omid Yousefi, an official with West Azarbaijan province’s department of environment as saying.

Flamingos are now living in Lake Urmia national park’s southern areas such as Hasanlou and Kaniborazan wetlands mostly because of enough food supplies, he explained.

With a surface area of approximately 5,200 square kilometers, Lake Urmia in northwest Iran, was once the largest lake in the Middle East and the sixth-largest saltwater lake on Earth, but is facing a dramatic decline for some years now.

Old and inefficient irrigation methods, depleting ground water resources within the lake watershed, long periods of drought, damming rivers which were supposed to flow into the lake and on top of that mismanagement and inappropriate measures intensified the lake’s status over time.

The lake which was a major tourist attraction and a home to hundreds of thousands of migratory birds has shrunk substantially. In 1997 the volume of water at the lake measured at 30 billion cubic meters which dramatically decreased to half a billion cubic meters in 2013 and while the lake had a surface area of 5,000 square kilometers in 1997 the surface shrunk to one tenth of that to 500 square kilometers in 2013.

However by planning restoration programs the volume of water rose to 2.5 billion cubic meters in 2017 and the surface area has now restored to almost half of the original amount measuring at 2,300 square kilometers. The return of the migratory birds could be also a sign of restoration of the lake. 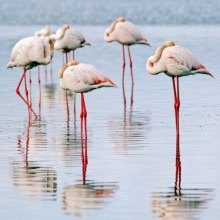 Public awareness necessary to save the environment Environment ,Iran