Letters are not case-sensitive
Send
The United Nations and the State of Palestine jointly launched an appeal seeking $547 million in funding for 2017 to support the humanitarian needs in the Occupied Palestinian Territory.

“International support is critical to continue providing relief to vulnerable Palestinians,” said the UN Coordinator for Humanitarian Aid and Development Activities, Robert Piper, in a joint press release with the Minister of Social Development of the State of Palestine, Ibrahim AlShaer, and issued by the UN Office for the Coordination of Humanitarian Affairs (OCHA).

“But we are just trying to buy time – this humanitarian response must be coupled with bold political action to bring the world’s most protracted protection crisis to a close,” added Mr. Piper.

The plan seeks $547 million in donor funding to implement 243 projects by 95 organizations, including 47 national and 35 international non-governmental organizations, and 13 UN agencies. Nearly 70 per cent of the requested funds target Gaza, where humanitarian needs are highest due to the blockade and recurrent hostilities, further exacerbated by the impact of internal Palestinian divisions.

According to humanitarian assessments, some 1.8 million people are in high need of protection in the occupied Palestinian territory and 1.6 million people are moderately to severely food insecure. In Gaza, over 50,000 people remain displaced from the 2014 hostilities, while 8,000 people in the West Bank are at high risk of forcible transfer due to a coercive environment. Throughout the Occupied Palestinian Territory, hundreds of thousands of people still have restricted access to essential services.

“This humanitarian funding appeal seeks to give a hand to the most vulnerable, the worst affected amongst Palestinian households across the whole occupied territory,” Mr. Piper said. 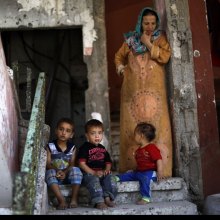